More Articles On Marketing and Technology

Get Comfortable With Dark Patterns, They’re Here to Stay 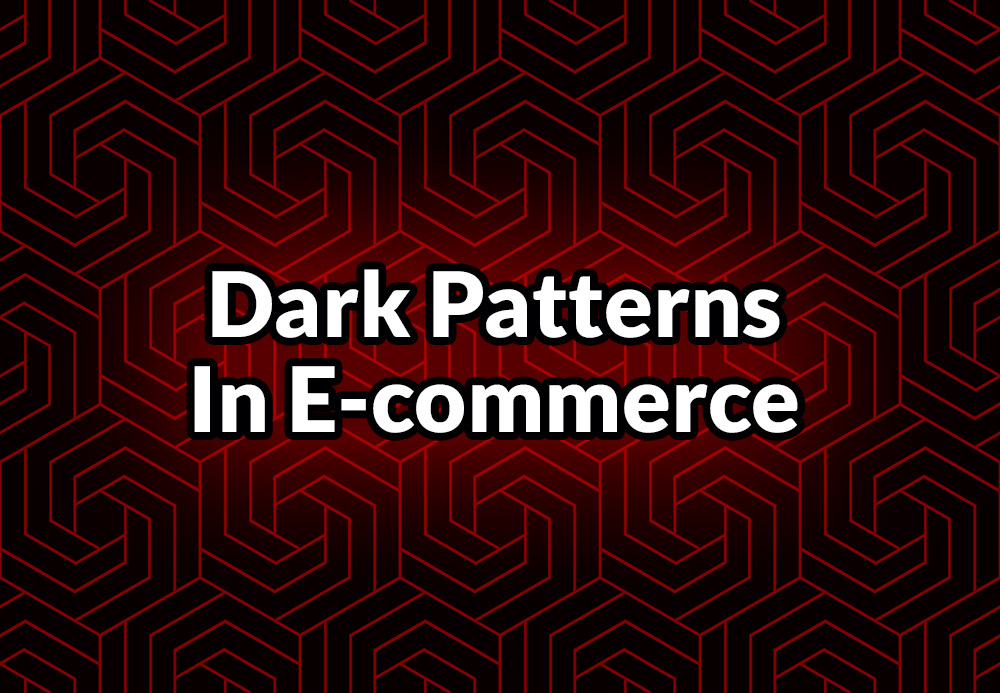 When competing for more sales and heftier bank accounts, how far would you go to ensure a better conversion rate or a longer mailing list for your business? What strategies would you employ to capture the lead and score the sale?

Ethics in e-commerce — whether they exist or not —  is a controversial gray area for merchants struggling to draw a line between what’s in the company’s best interest rather than the consumers or users. What used to be considered old-fashioned advertising has morphed into dark art, manipulative UX design aimed to persuade and exploit — regardless of how it sits with your conscious.

Dark patterns exist on the more devious side of consumer marketing, a sneakier form of trickery websites use to push customers to take action they never intended, such as buy a product or sign up for something. Though dark patterns are nothing new (user experience consultant, Harry Brignull, has been leading a crusade against this phenomenon since 2010), these online persuasion tactics have become increasingly cunning with the rise of e-commerce businesses.

But what’s more controversial than the patterns themselves is that nearly everyone does it, from colorful call to action buttons that suggest the “right” decision over the grayed out negative suggestion to pre-checked subscription permissions and automatic payments once the free trial ends.

Movements for companies to abolish dark patterns are about as common as the customer warnings issued to avoid them. Regardless, saying goodbye to your subscription with Spotify will always take time and breaking up with Amazon won’t get any easier.

Why? Because dark pattern tactics like these offer great conversion rates.

This means that companies will continue to sacrifice UX and website experience for the money. Keep reading on for why this is the case, and what the future could hold for dark patterns as online retail gets more and more competitive.

If Dark Patterns Are So Foul, Why Do So Many Companies Use Them?

Examples of common dark UX patterns websites use to influence users are:

Many would agree that all of these tactics all are morally questionable, but good for bottom lines. Even with ethics in mind, companies still want to know how to increase online sales in retail. Dark patterns are widely used because it works and it generates revenue.

This leaves merchants with a choice when it comes to e-commerce ethics for merchants: do I opt for the moral high ground or succumb to the “survival of the fittest” mentality?

For some e-commerce businesses, the use of dark patterns is simply a means to an end. They feel pressure to survive in the retail landscape and need to do so on a shoestring budget. It’s easy to understand and implement these less-than-noble strategies, regardless of ethics. Some might decide that there’s no immediate gain in doing things the right way.

Researchers from Princeton University quantified just how common this is in large retail companies like ThredUp, JC Penny, and TJ Maxx. Of the 11,000 websites they browsed, researchers found a total of 1,841 instances of dark patterns on 1,267 sites. The study caught major online retailers, such as the resale store, ThredUp, using “generated messages based on fictitious names and locations for an unvarying list of products that were always indicated to be ‘just sold’.”

These fake notifications stem from a preprogrammed list of names, locations, and items generated by ThredUp, which are presented to customers as actual recent purchases meant to tap into their overwhelming need to “fit in” and create a “fear of missing out” — nevermind that ThredUp could not confirm these deceptive messages were from real people, according to the New York Times.

But these ethically questionable marketing strategies go beyond dark “social proof notifications” that are so popular on e-commerce websites. Princeton researchers found that hundreds of retail sites used a tactic called “confirmshaming,” a strategic insult method meant to shame users who opt out of a newsletter sign-up or subscription form.

Here, a simple “No, thanks” might be replaced by a harsher manipulation message such as “No, I’m not into savings” or “No thanks, I don’t like delicious food” both of which were real “confirmshaming” examples submitted by users on its respective tumblr page.

Dark scarcity or the strategical use of color theory is only the beginning for dark patterns in retail.

The Future of Dark Patterns

The future of dark patterns promises to be more secretive and elusive than they already are. Still, merchants searching for how to increase online sales in retail would be wise to remember that consumers are more likely to go elsewhere based on the treatment they received from a company.

There’s a chance dark patterns get outlawed in future Senate bills as customers get more speculative and worried about their data online, but few proposals ever gain the traction they need to make a difference. Until one arrives in Washington, dark patterns are here to stay.

We predict dark patterns will use more big data, machine learning, and Artificial Intelligence to become more realistic and dynamic based on psychological habits and behavior tracking. What can we expect from dark patterns moving forward? Here are three possibilities:

1. FOMO messaging based on user data

Etsy is notorious for tapping into buyer FOMO using urgency and scarcity tactics to boost sales. Product pages often show messages like “there’s only 3 left”, even though most items on the site are customized and made to order.

Dark patterns of the future could get smarter in their FOMO messaging depending on user data and what companies have deemed most effective for each visitor.

For example, if data suggests a visitor is most likely to buy when they see others buying within the same minute versus the same day, the message might read “purchased yesterday” as opposed to “purchased seconds ago”. Other users might see “5 people purchased recently” based on history.

2. Customized notifications based on metrics

Notifications are only valuable when customers opt-in to them. Because most users have been burned by too many irrelevant notifications, their default state is to decline permissions from apps, companies, software, etc.

Expect companies to get more intentional and sly with their notifications, using data and metrics to define relevant notifications for each user.

Vitaly Friedman at Smashing Magazine predicts users might fall prey to highly targeted influencer notifications based on the wording, length, dispatch times, and grouping and frequency of notifications for different levels of user involvement that, in turn, boost engagement and/or sales.

Most people can detect paid influencer campaigns on their social timelines today. The amount of money tied up in influencer marketing is growing, especially when considering that a large chunk of celebrity endorsements go undisclosed, and those that do are more deceptive than ever.

Regulation of on-site advertisements is next to none, so it is possible that targeted ads will become better masked as photos within blog articles or real posts within Instagram feeds, leaving consumers unsure of what constitutes a valid product recommendation from someone they trust versus a sneaky paid endorsement.

An example from Smashing Magazine, shows an ad from “From Bermuda Tourism Authority” disguised to match all other stock photos on an article page discussing tips for fall travel.

Is There an Alternative to Dark Patterns?

So can ethics win over dark patterns? Does having a truly exceptional product and/or a better product than your competitors eliminate the need for these techniques?

In a perfect world, yes. But the more realistic alternative is creating a great brand strategy and quality product simultaneously. Given that consumers are fed up with companies wounding their hearts and breaking their trust, your business can surpass the competition by focusing on the long-term rather than the short-term. Dark patterns might outweigh positive online experience when it comes to email sign-ups or number of add-ons sold, but growing mistrust from customers will harm your brand in the long run.

Your acquisition channels will reward you over your competitors if you offer something of 10x value: a product and an experience that is easy to use and understand, dark patterns not included.

Remember that customers are increasingly aware that they are being influenced, meaning they’ll gravitate to companies who remain transparent and fair. Simple tweaks to design and development are easy to implement for businesses committed to building a lasting reputation and who understand the impact a positive reputation can have on your bottom line.

Lauren Hamer is a Digital Content Writer and Copy Editor who helps top companies and small start-ups to define their brand through quality, conversational content.